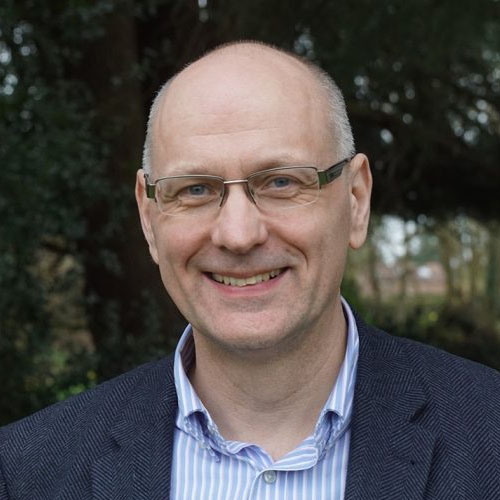 David joined Moorlands College as Principal in January 2019. He was previously Principal of St John’s College, Nottingham and Assistant Dean of St Mellitus College, in whose founding he played a significant part. Before that he was Head of Theology at the Evangelical Alliance UK for nine years, also serving on the Executive of the World Evangelical Alliance Theological Commission. David is an ordained Anglican minister and was a member of the Church of England’s Faith and Order Commission from 2006-2016. He currently chairs the Evangelical Alliance’s Theological Advisory Group. He is a graduate of the Universities of Nottingham (BA, PhD) and Oxford (MA), and has led or served on the ministry teams of five local churches. He is a Londoner by birth and is married to Mia, a senior hospital chaplain. They have two grown-up children.

David is passionate about communicating theology in a wide range of contexts, whether supervising and examining doctoral students, teaching at Masters, BA or Foundation level, speaking at Christian conferences and festivals, writing, preaching, blogging or appearing on media. He also enjoys cricket, cinema and poetry and listens to a lot of classic rock.

David’s main teaching is in the areas of doctrine, church history, mission, ethics, worship and the theology of culture.

As his publications demonstrate, David’s research interests are diverse, but he is particularly focused on the history and theology of Evangelicalism, on the intersections of doctrine, culture and ethics, and on the relationship of linguistics to biblical and theological interpretation. He has supervised and examined doctoral and Masters dissertations in all of these areas.