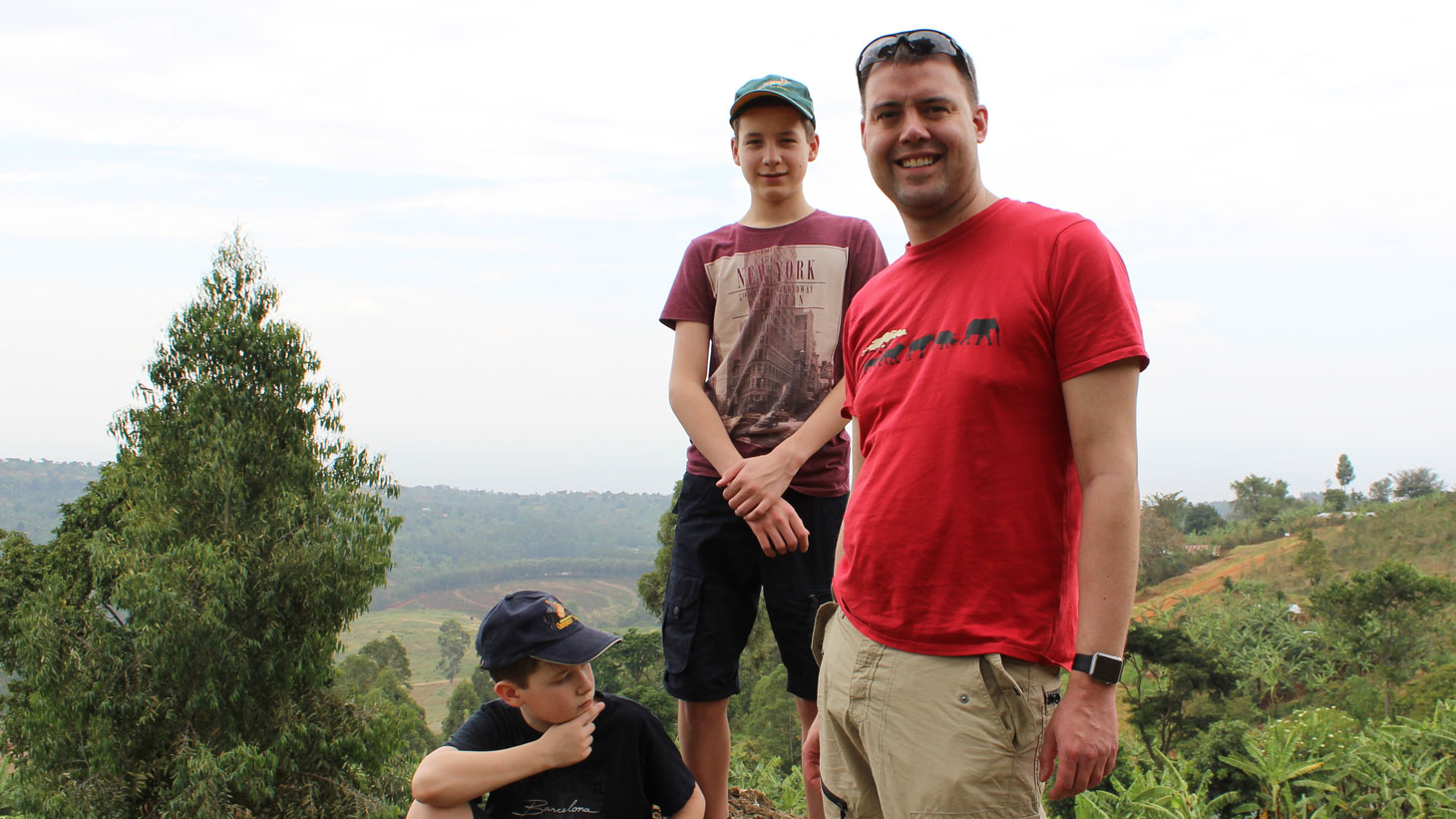 Above: Matt Mellor, with the sons of fellow traveller Gavin, in the Ugandan hills

In January 2017, representing Sunnyhill Church in Poole, Matt travelled to a town called Mbale in the Eastern Uganda. With him were fellow church member Gavin Millward, and Gavin’s two sons aged nine and 13. The six-day trip was organised as part of Sunnyhill’s commitment to world mission where they have two focuses; the first on training church leaders in China, and the second of which supports children in Uganda—a place that has been greatly on Matt’s heart for more than a decade.

“My main heart for Uganda is that there are so many people in so much need; it’s hard to sit in a nice office in Britain and think about this. Their need is so much greater than we can understand. Sunnyhill have done a variety of things over the years such as giving out medical supplies, Bible training for pastors, providing blankets for the cold nights in the mountain villages and for the last four years, we have been delivering Christmas presents to Uganda. This year, Sunnyhill were able to provide a water filter tank for the school and we also wanted to take something that the children didn’t have, which were shoes. At church, individuals donated £6 towards a pair of shoes and in total we managed to provide over 400 pairs of shoes for school children in Uganda.”

After three days of travelling to Mbale, and driving up the mountain to the village, the team supported the school’s Christmas Party.

“It was nothing like you’d expect a Christmas party to be; it was in the open air and in the blazing heat! Eight hundred people turned up to the party; we fed all of the children boiled eggs and chapatis which are two foods that they wouldn’t usually eat. Eggs are commodities that farm owners sell on, so to give a child a boiled egg is a really special thing. The children all were fed, given a fizzy drink and joined together for games in all different age groups which worked really well. We then gave out the boots specifically to the children who were from the school in the village, so at the end of the party, we got the registers from the school and called more than 400 children up, one by one, and gave them their boots.”

Above: The Christmas party was an ideal time to distribute 460 boots to the children

The day after the team had left the village to come back to England, Matt heard that someone came to the house they had been staying in to thank them for the shoes. The individual wanted to thank the team because their child was the first person in their family to wear a pair of shoes. “For someone in Uganda, something as simple as a meal or shoes is so important and yet we take for granted. It makes you realise what matters, and what doesn’t. On this particular trip, I really, really learnt that love is action; it’s not just a feeling.”

A real eye opener for Matt was having travelling companions in Gavin’s two children: “I’ve gone to Uganda ten times and you get accustomed to some stuff, but it was really cool to see Uganda through the eyes of children. Seeing the things that they noticed and watching them playing with kids their own age in Uganda struck me; they spoke on a universal language of ‘children’!”

His first interest for mission started just before he came to Moorlands College as a student (2004–2007). “I felt really called to take a gap year and go to Bible College, so I decided to work for Oasis where I led a global action team that went to Uganda for six months in 2004. When I planned to come to Moorlands, I had signed up for the Youth Work course, but while I was in Uganda, God led me in a different direction and I took the Cross Cultural course as a result. I’ve been going back to Uganda ever since and have taken four Moorlands College students with me over the years.”

It’s extremely important to note that you do not have to be on the payroll or the staff team of a church to do ministry, and Matt is a great example of that. He has a full time job as a Technical Support Manager, works so hard supporting the local church and also devotes time to going on mission. Discussing this thought with him, Matt said, “When I first finished at Moorlands as a student, I wrestled with the expectation of going straight into a church role, but actually in working life, I love my church involvement as well as my job because it’s a tentmaking role. At Moorlands, I feel like the tents I’m making are actually for the Kingdom as well! I am quite a high capacity person so I don’t expect people to operate the way I do, but if you put the right things in a week, as well as relaxing, you can cram a lot into it. You just have to put the right stones in first. I currently have time that I can use for God, church and Kingdom and so I’m going to use it!”

Above: The children wait patiently for food and presents

Thinking ahead, Matt is looking forward to going to Uganda again perhaps next year, and Sunnyhill Church are also looking to taking a bigger group in 2019. Matt wishes to encourage others to go on mission and urges people to “not let the practicalities ever stop you from doing it.”

If you would like to pray for the school in Uganda visited by the team , Matt asks if you could pray for the following:

Above: The gratitude from adults and children alike, for things we often take for granted, helped Matt realise “that love is action; it’s not just a feeling”