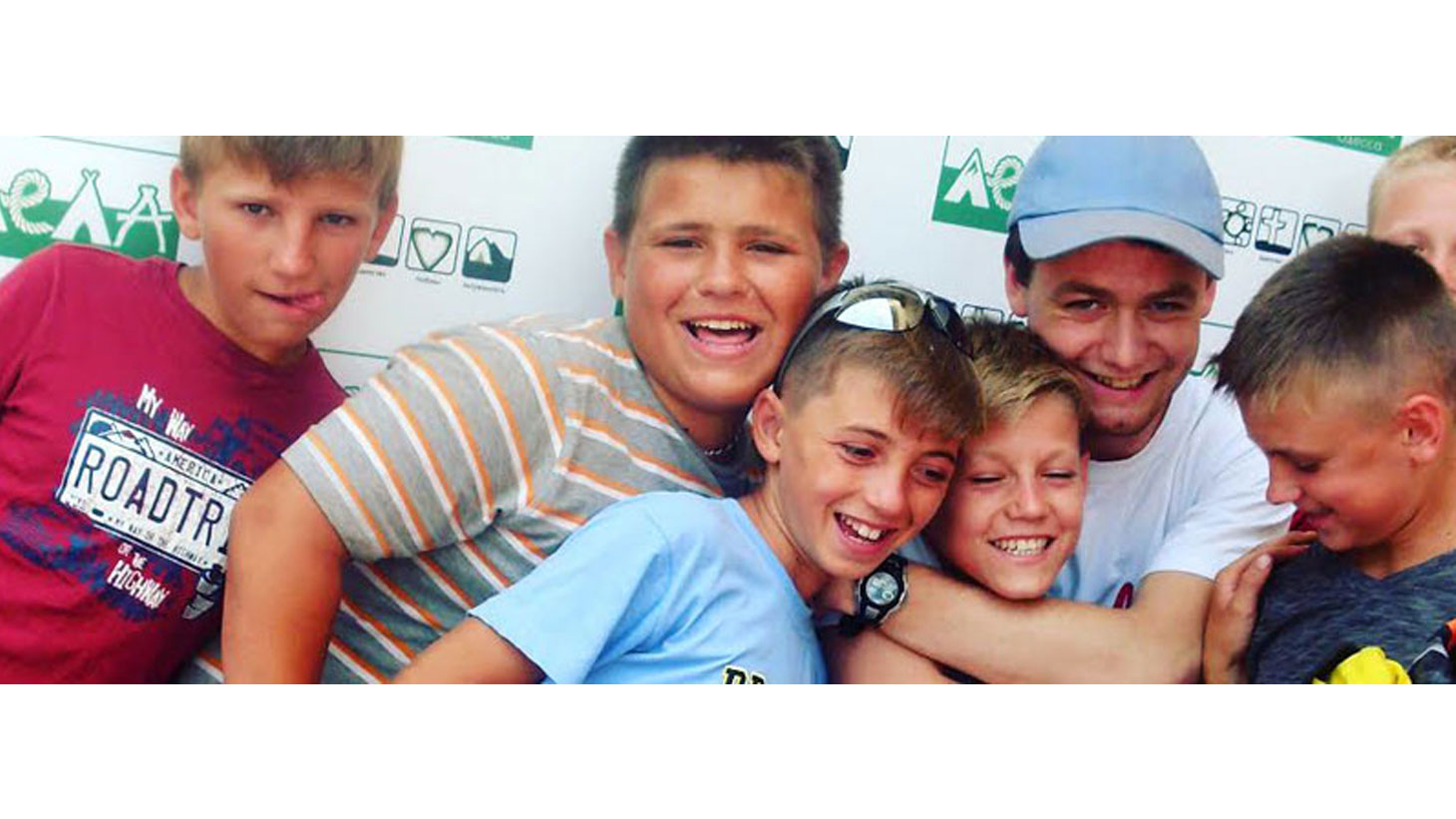 SW: Where did you, and the team from Moorlands, travel to this summer?
SH: Led by Captain Ian Kirby and his wife Fay, our team of ten travelled to Ukraine with OM for approximately two weeks. We had a three-and-a-half hour flight to the capital, Kiev (in the North), before a further one-hour flight south to Odessa, a beautiful city and port within which we were based for the duration of our trip.

SW: Who were the people/communities that you were reaching out to, and why was the mission trip needed?
SH: We worked alongside local churches in Odessa to run one of a number of camps that the churches run over the summer for the marginalised children of their community. The particular camp we served at was a week-long camp for orphans aged 5–18. Most of the orphanages are strategically places on the outskirts of Odessa so that the local don’t have to accept or acknowledge their existence. The orphans are ‘out of sight, and out of mind’. Within the orphanages themselves, many of the children really struggle. If the trauma of growing up without parents isn’t enough, then the culture of violence and abuse is enough to bring you tears. Within some of the orphanages the older children will physically beat the younger children who will grow up and beat those younger than them—it’s a vicious cycle.Whilst the orphanages house and feed the children, they don’t really nurture them or prepare them for life. As such, when they leave the orphanage they don’t know how to survive, resulting in the gruelling average life expectancy for an orphan in Ukraine being about 23, maybe 25.

“The orphans are ‘out of sight, and out of mind’… If the trauma of growing up without parents isn’t enough, then the culture of violence and abuse is enough to bring you tears.”

For children who are in desperate need for fun, safe, accepting, and nurturing environments and people, the summer camp we helped to support provided the ultimate respite. The camps were structured to enable an incredibly fun experience, yet one that better prepared them for life through an array of well-planned challenges! The camp also was well-structured to engage the children with the gospel and the heart of God through Bible stories, worship and many, many hugs!

SW: What were your particular highlights of the trip?
SH: This is a very difficult question—there are so many!

However, if I had to narrow it down to one highlight, then I would pick the children! Let me tell you about one child in particular, my friend Tim. Tim is a cheeky and playful 13-year-old orphan boy who I met at the camp. He has an incredible smile and a generous heart. I bumped into Tim on the first day of the camp as he was playing with a couple of magnets. He would throw the magnets up into the air in such a way that as they bumped into each other they would make a sizzling, crackling sound. It’s the kind of toy you could probably get quite cheaply off Amazon or maybe even in Poundland. I wanted to try and befriend this boy but, as a foreigner in Ukraine, my Russian language skills left something to be desired! Nevertheless, I had enough vocabulary to ask if I could have a go with his magnets. He happily let me have a go, delighted (I think) that this funny foreigner was giving him some genuine attention. After several failed attempts at replicating the sizzling effect he created, he took the magnets back and patiently tried to teach me. Several attempts later I did it! Seeing the look of delight on my face at my humble accomplishment, Tim took my hand, placed the magnets in my palm before closing my fingers around them whilst simultaneously gesturing that he wanted to give his toy to me. I was little overwhelmed. This boy gave so freely. Did he expect something in return? I wanted to better understand the significance of this gift, so over the week I tried to get to know him better. I played ‘SALA’ with him (the Ukrainian version of ‘It’ which translates: ‘Pig’s Fat’), laughed with him and asked him questions whilst giving him a generous helping of hugs and attention—something I saw he really valued.

“I was little overwhelmed. This boy gave so freely. Did he expect something in return?”

One evening we were sat together looking at photos and he told me that he lived with his Mum and Dad at home.

In truth, Tim lives in an orphanage. I don’t know where his parents are. Mostly likely they’re either dead, in prison, they’ve abandoned him, can’t afford him or are too caught up in drugs and alcohol to look after him. He told me what he wanted to be true.

On another day, with the help of a translator, I asked Tim how many personal possessions he had. Tim answered: three t-shirts, two pairs of shorts, two pairs of shoes, some wristbands he’d got quite recently, some deodorant, a toothbrush and a bag to put it all in. I asked if he had anything else at home (I pretended I didn’t know that he lived in an orphanage…) to which he answered, I have my own shelf!

This meant that when Tim gave me his magnets, he was giving me his only toy.

Why? Because he’d had fun playing with them and now he saw I was having fun with them so, to him, it seemed natural just to pass the toy on to me.

This boy who had so little, deserved so much was able to give so freely. And Tim wasn’t the only one. All of his friends came from—and lived in—circumstances that were just as soul crushing. They had just as few possessions and yet they gave just as freely! They didn’t expect anything in return (well, most of them!), they gave what they could because they could.

At the end of the week I wrote Tim and his friends some short personalised messages that I got translated into Russian. I’ve done this countless time with children in my youth groups in the UK, yet never have I ever seen just gratitude. Upon receiving my small gesture, some of them of cried. Some of them hugged me. Some didn’t know how to respond. Some clung to their letters like they were made of gold. Others tried to give one of the very few personal possessions they had.

These children seldom encountered genuine love so when they did they were overwhelmed.

“Some of them hugged me. Some didn’t know how to respond. Some clung to their letters like they were made of gold. Others tried to give one of the very few personal possessions they had.”

There was another ten year-old boy who I hugged on the first day. He was resistant at first, but as soon and he saw that I was being genuine, he clung to me all week, refusing to leave my side. Now I’m certain this boy wore the same t-shirt all week and he clearly wasn’t a huge fan of showering as a certain odour quickly became apparent. Yet had this boy worn the same t-shirt for a year and not showered for a lifetime, I don’t think I could have resisted holding him in my arms as I showed him just how valued and significant he was. After all, it scared me to imagine how many weeks it might be before someone else would next hug and hold him as genuinely.

“Never have I encountered children so poor in circumstances yet so rich in virtue. They gave and received in way that God does: freely and self-sacrificially. They’ve been forgotten by their families and their communities, but not by God.”

“Religion that is pure and undefiled before God, the Father, is this: to visit orphans and widows in their affliction, and to keep oneself unstained from the world.” James 1:27

SW: Prayer points?
SH: For the church of Ukraine, that God would continue to strengthen, bless and protect them as they partner with Him. For the orphans of Ukraine, that God would protect them, that He would draw them closer to Himself and that more of the right kind of parents would become available to adopt them. And for us as we return to our lives, yet longing to return changed. Pray that God would help us to process what we have experienced and that people would ask us about our experiences as we all have stories that need to be heard!